News broke yesterday about two men dying in a crash involving an Autopilot feature of a Tesla, where the vehicle was reportedly traveling at a high rate of speed around a curve. https://www.nytimes.com/2021/03/23/business/teslas-autopilot-safety-investigations.html https://www.wsj.com/articles/fatal-tesla-crash-in-texas-believed-to-be-driverless-11618766363 Source: The Wall Street Journal; The New York Times While driverless cars and Autopilot features are going to become more and […] 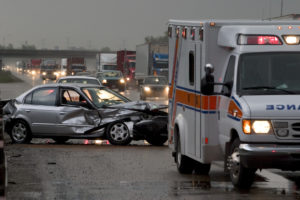 Auto and Truck Accidents Are On The Rise

As states re-open, there are increased risks of auto and truck accidents. Many people have become used to open roads and to driving faster than they should. Some people have not driven in weeks and are out of practice. According to reports from the Missouri State Highway Patrol,  traffic fatalities are up 11% compared to […]

Family of Four Dead After Truck Crosses the Median

A fatal car crash in St. Louis has claimed four lives; two women and their daughters, who were headed to a volleyball tournament. Accidents like this one are far too common in Missouri, and the outcome of this one was devastating.  The crash took place on Interstate 64. The driver of a Ford F-150 lost control of […]

MoDOT Sued After 8th Death Due To Crash

The intersection of Riverview Drive and Scranton Avenue in North St. Louis has proven to be a dangerous one over the years. Eight people have lost their lives in car crashes at this location. People are saying it's more than just coincidence, and they believe that MoDOT is ultimately to blame.  A Wrongful Death Lawsuit is […]

Police chases aren’t just in the movies. A vehicle containing two men fired weapons at an unmarked police vehicle which began a three-hour car chase that ended in tragedy. After firing on the police vehicle, the suspects fled. They were spotted a short time later, but they managed to evade police pursuit. Eventually, they were […]

What to Know About Multi-Car Crash Incidents

Car crashes can happen to anyone. A couple of weeks ago an accident on 64 Eastbound left a motorist trapped in their car and traffic backed up for miles. The accident closed down several lanes and left four lanes fighting to cram into two. Fortunately, there were no fatalities, but the trapped motorist was extracted […]

Self Driving Cars: Here’s What You Should Know

The newest innovation in the automotive industry is the self-driving car. Many see computer-controlled cars as the next step in vehicular evolution. Despite what you may believe, they are not without fault. Despite the fact that computers are incapable of being distracted by any human shortcomings, they have the same capacity to glitch as a laptop […]

Motorcycles are common in most parts of the United States, but due to seasonal and atmospheric changes, they aren’t an everyday mode of transportation. Here’s a list of ten safety tips for drivers to keep in mind when motorcycles may be present. • Double check that you aren’t missing a motorcycle because you aren’t used […]

What To Know About Red-Light-Running Car Accidents

According to data from AAA's Foundation for Traffic Safety, 939 people were killed in 2017 because someone ran a red light. It's alarming because this number is increasing at a fast rate. This number is not only at a 10-year high, but it also represents a 28% increase.  Many of the car accidents that take […]